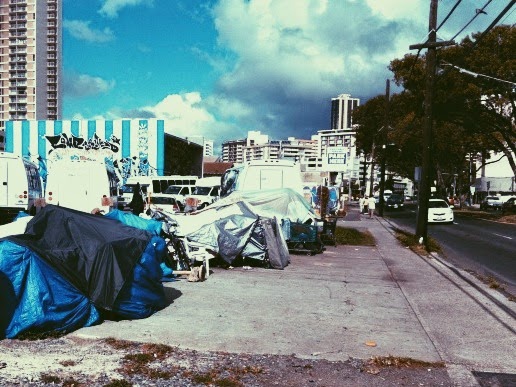 CLASS C DRIVER’S LICENSE HAWAII
SIDNEY KANOA AIKAU
— STREET WAIMANALO, HI 96795
BIRTH DATE: — 1981
SEX: M
HT: 6-4
WT: 190
ORGAN DONOR
He lost it somewhere on the road. It might have happened at the cove, where he slept one night on his way to town. If he lost it there, then it might now be at the bottom of the sea, or caught in the belly of a large fish, or built into a mountain bird’s nest—it was somewhere beyond his reach which meant it was gone and could therefore be easily forgotten. Who, however, had he consequently become? It was his unconscious belief that since that day he had unalienably become no one, and that was that.
While waiting for the rain to end, Sid had nothing to do but check his inventory: a seat cushion from a comfortable lawn chair, a bike rack, nine plastic bottles (some empty, some not), three tattered bamboo beach mats, a nylon tote bag with the phrase Have a Pleasant Day Hawaii silkscreened on one side, a change of shirts, a change of board shorts, several undergarments, an old sun hat, a rusty bike chain, etc. He recently moved his most valuable item from a pencil-box at the bottom of his pile to his left pants-pocket—it was a miniature replica of an old skateboard with the image of a red dragon that his father had given him shortly before he died. Sid felt connected to his father whenever he held it, which both comforted and grieved him. One day he hoped to have it made into a necklace, always near his heart. In fact, he had a small savings in his right pocket for that purpose, although he had no idea what it might cost and wasn’t sure how to find out. Most mornings after reading the previous day’s newspaper, he rode the gift over and around a smooth stone he kept as a miniature skate park. That was his time to escape, and to think fond thoughts. As usual, the rain didn’t last long and he calculated that it was probably safe to close his umbrella and he buried it again in his horde.
Sid dug at his scalp, which bothered him ever since he got a case of tinea capitis after a three-dollar night at IHS. He knew there wasn’t much to be done about it; salt water eased the discomfort, so he’d go later for a night-swim. First, however, he needed to eat. From the savings in his right pocket he counted several bills and two dollars in change, which matched his count from the previous night. Fast food was never his first choice but it would leave him full and with money left over. This appealed to his dream of soon converting his father’s gift into a necklace, and he left his spot on the side of the road, slowly wheeling east.
Posted by Henry Grace at 10:51 AM