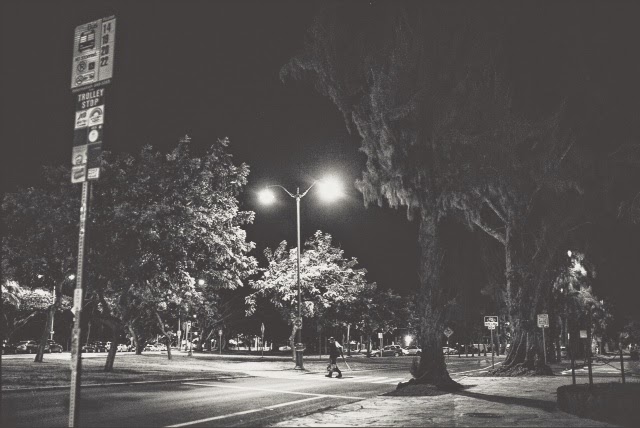 Under the omniscient, patriarchal face of the quickening Hawaiian Sun, Waikiki is a haven for the virtuous and the innocent, for blind young lovers, for fragile hula children dancing unknown lives lived long ago, for ukulele minstrels resuscitating ancient songs whose breath had grown shallow, constricted by the immeasurable weight of time. But the Sun daily descends into the infinitely distant boundary of the sea, and as the indifferent Moon arises with her back to the dynamic, nighttime world, the virtuous withdraw while the vicious emerge victorious from their dens, to reign. It had not always been this way— since the first sunset, night was the period of the gods, while day belonged to man. The world has, along the way, become twisted upside-down. Sid knew it and as a rule he avoided the darker places.
Nonetheless, he rose and found himself deep in a palm forest. He was groggy and confused, as if he were the old man from the well-known story, waking from an hundred years’ dream to an unfamiliar reality. A monkey howled somewhere in the darkness, followed by another and another until a frightening bestial choir ricocheted from every tree. He blinked in confusion and wondered for a moment if he was still on Oahu, or if he had been transported to some uninhabited Pacific island jungle. In the distance he saw the cold electric lights of the Waikiki pavilions and realized he had only heard the caged animals in the zoo across the street. He was relieved, and although he was not consciously afraid he wanted to leave quickly. Within him still was the vestige of a primal human fear, urging his instincts to carry him to safety. 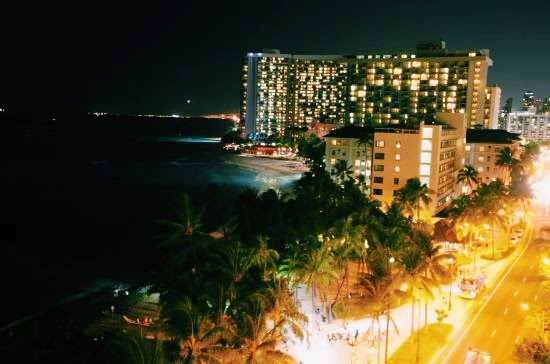 With only such a vague destination, he stumbled toward the pavilions where, during the day, clans of seemingly carefree, unemployed Micronesians drink beer and grill government hamburger. From the outskirts of the forest, he made out a small gathering of unfortunates that appeared to be frozen under the flickering white light of the nearest pavilion, beneath the knotty hau tree. As he approached, he saw that the huddling mass wasn’t still, but throbbed and pulsated like a beating heart. He was compelled by the image to advance, until the swarm of bodies suddenly separated and dispersed, scattering like roaches exposed to the light. Sid recognized the faces of a few of these young unfortunates that would, after prolonged exposure to the night, find that their souls had slipped into the ether, or rather it would happen and they would never discover it, or else they would creak like worn, weak wood under the enormity of the fat man’s footfall, and snap beneath him. The fat man was Fatty Baldy.
The notorious behemoth Fatty Baldy sat at the table that had been the nucleus of the teeming cell, picking his teeth. The table at the pavilion under the hau tree was his home in that whenever one looked for him, he was certain to be there. By that logic, however, Fatty Baldy’s home might be anywhere. Sid knew him when he was a skinny, long-haired boy living on his street. Now, he lived downtown, he lived in Waikiki, he lived in the valleys. He was leeward, windward, mauka, makai. He was everywhere.
Fatty Baldy reclined at the bench like an aged lion, his dry, swollen feet stretched in front of him. Sid stopped a short distance away, and hailed him. After studying Sid for a moment, a smile cracked his wide, shiny face. A sharp gold tooth shone in his mouth.
“Ho, Kanoa! I tink thass you,” said the giant, recognizing Sid. “So what kine stuffs you need, braddah? Everyone come fo me dey need someting. I alway wen get um, too.”
Sid stood quietly, gently scratching the back of his head where it itched.
“You stay strange, brah, like you mento, someting,” he bellowed with laughter. “Howzit anyway? Me, I stay same as you know me from before. I guess some people dey can change. But you membah me from small kid time. Same same.”
Sid eyed the fat man dubiously, and the fat man knew Sid understood him well. Fatty Baldy chuckled like a braying ass and gave a great snort. Lifting his massive hands to his eyes, he wiped away his happy tears.
“Ya, you know bettah! No can fool you, you always plenny akamai I membah. I guess I stay akamai too. Thass what I mean. Heah, I wanna talk story wit you. You membah our street get no one selling coconuts still ya? Well someone see coconut stay missing. Dey start selling coconuts, den boom! people get happy. Bumbye dey get plenny coconut place but everybody membah dat firs guy. Thass how tings work—I membah dat lesson. If dat guy ain sell coconuts, some oddah guy going sellum. No question. Now, you see I sell my own coconuts. And da people get happy too. Dey muss get happy, dey come every night fo see me. And you know what, same kine ting from small kid time—if I ain sell coconuts first, anoddah guy sellum instead.”
Fatty Baldy paused and suspiciously eyed Sid, who still remained silent. After squinting one eye in appraisal for an uncomfortably long time, the fat man shifted forward in his seat and extended his hand, which Sid took and held weakly.
“Kanoa,” he said slowly. Still squinting with one eye, he shifted his attention to a passing cruiser, following it to avoid Sid’s gaze. His voice sounded hollow and flabby, like a soft balloon releasing the last of its air. “Kanoa, your old parents, dey good people. I nevah forget them. Thass why if you need help, come fo me. I no can go anywhere. I got nahting else fo do wit myself, an going nowhere. You know me, everybody know me. No can change, like I say. I tink, bumbye can go da mainland or any kine place, I gonna change. But I know we bote going stay heah. Hawaii Nei, brah. Nevah change.”
There was a rustling in the darkness, beyond the limits of Sid’s vision. Fatty Baldy cleared his throat and gently squeezed the other’s hand in his once more before releasing it. “Shoots den braddah. Maybe you hele now. I get tings need my attention. You membah what I say! Try call when you need me. I stay everywhere.”
Sid backed away from him and from a distance the shadows gravitated, as before, to the great figure, like tracts of light slipping one-by-one into the vortex of an imploding star. He then hurried away east, not knowing exactly why or where he would go.
Posted by Henry Grace at 10:47 AM