At the End of the Rainbow (Part 5) 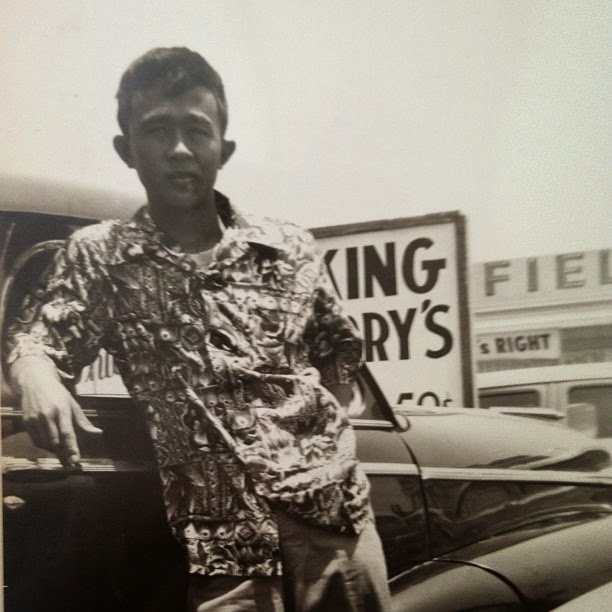 Months passed and Dorothy continued her weekly routine, although she hadn’t spoken to anyone—even Alice—about Anuenue Plantation. She felt somehow that she couldn’t talk to her friends about it, and she wasn’t ready to say anything to Daniel because he’d put more pressure on her to move. There was something holding her back from signing the papers and retiring to the North Shore, but she didn’t know what.
One evening after she had gotten back from a day at the movies, she habitually boiled an egg and, with some shoyu and leftover rice, hobbled to the butsudan and knelt. She set the rice before the old photograph above the cabinet and spoke quietly, with her eyes on the floor.
“Tetsuro. Tetty. Tousan. I do not know what to do.” She sighed sweetly. “Oh, natsukashii. Remember? Asokokara kaettatoki, going to get some land in the country. Dream to have a small house away from everyone. Dream to have small garden, and hens for eggs, and one big fat rooster to kill mongooses and protect our hens? But never go there. Kokoni ittetayo. kono chiisainaheyawa watashitachino heyadayo. Now, I made this room mine. I exercise, I have friends, I have hobbies. Shikashi, sugu, anatano youni naru. Going leave here. I want to spend my last days peacefully. Maybe I can go to the country. But it is hard to leave. Sometime I think, I can go the plantation. I can finish this old dream. But this space here, I cannot go. Nannen tattemo, anatao wasurenaiyo. I am asking for help me now do what is right for me.”
She gazed at the silent old photo of the haughty young man and waited.

* * *
Daniel came by the next morning to take her to the doctor. As usual he was on time, he opened and closed the door for his mother, he made sure she was comfortable on the way.
Dorothy observed him and saw these good things in her son. Unlike many parents of her generation, however, she didn’t see his goodness as a reflection of her own; she saw it as meritorious on its own account. It was at that moment that she felt she was thinking clearly about the past few months, and she spoke.
“You think I cannot take care myself,” the old woman declared, and immediately regretted it. Her son kept quiet but she could sense his frustration, and she didn’t look forward to his response. She was surprised when they arrived at the doctor’s office and he stopped at the front door, walked around to her side, let her out, and escorted her to the elevator.
“I’ll be up after I park the car,” he finally said.

* * *
The doctor’s visit was nothing out of the ordinary, and as she came to the vestibule, Daniel was casually reading a magazine. Setting the magazine aside as she approached him, he offered her his arm. “So how’d it go?”
“Oh, it’s fine. You know, Dr. Okada is the best. He say I stay pretty healthy.”
“Well, that’s great. I expected that, but it’s still good to hear.”
They drove back to the apartment on Kanunu Street. Daniel stopped in front of the building, but he didn’t get out.
“Why do you think that I believe you can’t take care of yourself?” he said after a moment.
Dorothy hesitated, because she didn’t know. It wasn’t even that she thought that of her son, she just didn’t know what she thought.
“Daniel, you know what, I am not keiki. I do not need someone to watch me like keiki. I can watch myself.”
“No, no, no, it’s not like that at all, mom,” he said seriously, removing his glasses and facing her. “Nobody thinks you’re like a keiki. If anything I’m the keiki and you took care of me. You took care of our family. You raised me and what can I do to repay that? Not enough. Nothing will ever be enough. What I can do, though, is bring you somewhere that is far away from all that this place has become. Will Anuenue live up to its name and what we’ve seen of it? You saw it yourself. So it’s up to you. You are capable of making your own decisions, and I haven’t been respecting that. But now that you’ve seen that place, you should decide: what do you want?”
Dorothy still didn’t know exactly how to respond to her son’s question, but she did know that sitting still, as she had done for so long, had exhausted her. As she thought about it she felt surprised because she had always thought of inertness as being restorative, something you would do as a way to build a reservoir of energy before making a big move. She supposed then that she had been sitting and waiting for something big to happen, but it hadn’t, and instead she sat and sat and then became obstinate, refusing to move, and as she had the feeling of exhaustion snuck up on her slowly, as discomfort somewhere inside one’s body becomes a dull ache, which becomes more pronounced, which sharpens gradually until the pain is overwhelming. She then realized that this choice that her son had presented her might be the big thing.
She wanted to respond, but still the pressure of doubt choked her. As she struggled to free her throat, tiny spots silently appeared on the windshield, followed by a few more, and a few more, until great drops of rain pit-pattered heavily on the pair in the white Toyota, loudly enough that it didn’t matter that Dorthothy’s voice had been taken. The rain lasted only seconds, then the sky cleared and the clouds blew over the mountains, leaving a dim rainbow that faded as quickly as it had come.
“Daijobu,” she said in a small, clear voice. “You right, Daniel. Let me sign. I been decide.”
Daniel opened the console, where he kept the papers every day since he had secured funding from the government for his mother to live at Anuenue Plantation. He handed them quietly to her. She took them with her left hand. With her right hand she reached for the black pen in her white purse, and was startled to find that her purse wasn’t there where she had never failed to carry it for as long as she could remember. Mute once more, her lips slowly separated and her mouth fell open from the fear that grew from the confusion within her. She looked to her son to help her, to do something that would save her. Thinking he understood what his mother needed, he reached into his shirt pocket and, with a wide smile of relief, gave her his pen.
Posted by Henry Grace at 10:55 AM