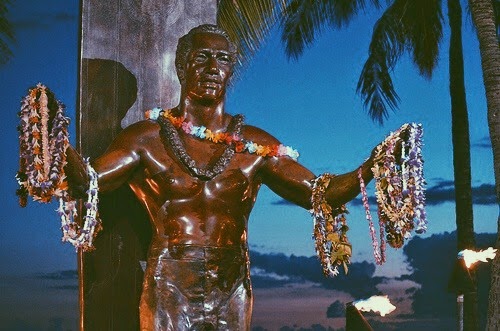 An ambulance careened by. Everyone on the street cupped their ears in irritation, and Sid waited with the rest of the people until the siren passed. Although he had become indifferent to urban noise, the feeling he got from this emergency was uncanny to the point that his ears rang with the phantom buzzing of invisible bees, upsetting his stomach. More likely than not, some tourist was hit by a car—that kind of thing was very common and he read about it in the paper more often than he liked. He decided that if he walked to the end of the strip to see for himself if the tourist survived, it might settle him and then he could eat in peace.
When he reached the end of the hotel strip he saw a wild scene. Beneath the expanse of Duke’s wide, welcoming arms a mob of tourists gathered around several police cars that had secured a broad area of turf. Flashes of blue and red stung the palms and the banyan tree behind them, which loomed ominously like an amphibious beast ambling out of the water onto the black sand. The ambulance was there. Sid saw a stretcher draped in a white sheet, and it was evident that someone had died. Leaning against the red and white truck, the paramedics conversed with each other impotently; there wasn’t much for them to do with a dead patient, so they had no reason to be in any hurry one way or another. Standing apart from the crowd was a fellow unfortunate he knew who, being uncommonly clever, punctually patrolled the streets each night asking for a modest contribution to his cause. He was called the Dollar Man. Sid approached him and asked what had happened.
“Colonel,” the Dollar Man said.
Now Colonel was a composite unfortunate, meaning he was both of the proud and the partial. As far as Sid could tell, he was bat-shit insane. Every spare cent Colonel earned, found, or stole, he spent on cigarettes, and he would drill shirtless up and down Waikiki every evening in a pair of fatigues and boots, smoking and occasionally pausing to shout in tongues at someone or something that wasn’t there. Sid didn’t know Colonel’s story, he only knew it ended—probably meth, or something like that. (Sid discovered later that the old man had died of an aneurism after he had gotten into a fight with an invisible enemy—maybe Jacob’s angel, maybe even the Holy Spirit Itself—and lost. Colonel had collapsed, mute and writhing in the sand.) Regardless of the circumstances, Sid had to turn his head from the fluorescent outline of the amorphous human heap surrounded by a gaggle of vacation-going gawkers. Rubbing his scalp, he silently bid farewell to the Dollar Man and advanced, the crowd dividing itself to escape him.
He lost his appetite after the events under Kahanamoku, and he sought a quiet place where he could be alone. He made his way through the end of Waikiki, past the bandshell, up Diamond Head Road, by the wrought iron gates at the end of the obsessively manicured lawns of the stuccoed seaside mansions, above the great ocean, to the neighborhood at the bottom of the hill. At the end of the road were the stairs leading to the shore. He approached the private place and nestled in the soft, damp sand at the foot of a great stone wall crowned with bougainvillae. He tried to relax, resting his head on the rock. 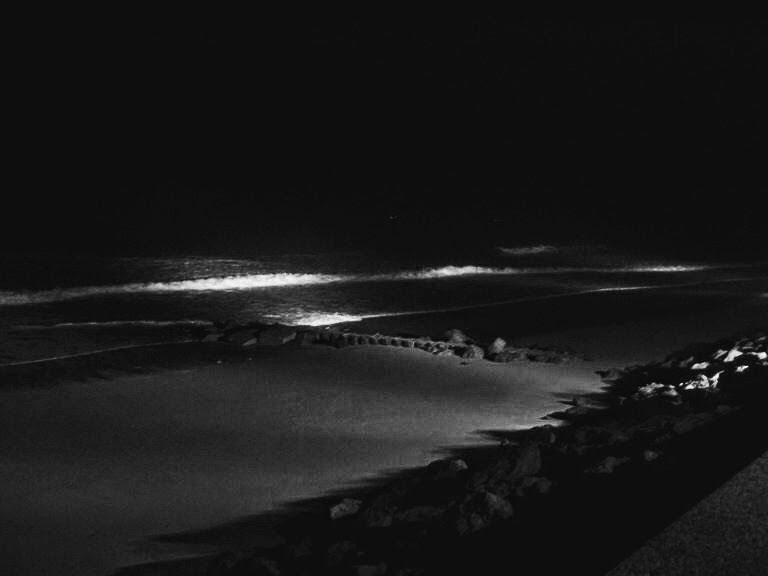 If Sid was troubled in the past he came to the ocean for guidance. When his father had died, followed by his mother, it comforted him. When he was betrayed by his friends and found himself living on the street, he unreservedly delivered himself up to it with bowed head, and it responded by extending to him its cool, white limbs, to embrace him and take him home. Now he felt it offered him nothing. Rather than murmur the promise of solace it seemed savage and dark, seething, roaring nastily, each wave crashing on the shore a hungry hell-mouth unharrowed.
He reflected for a long time on the old unfortunate’s death, a death he found unreasonably discomposed him. The lifespan of an unfortunate is an uncertain thing—Colonel’s had been long and its immanent end shouldn’t have been a surprise. Nevertheless, Sid wasn’t prepared. The longer he brooded on what he had seen, the more active and alive his thoughts became. A vision of the dead thing came into focus—a shirtless, sun-hardened torso haunting the sky over Sid’s mind. It said nothing, and did not acknowledge him, refusing to show him more than a profile of its reddened face. It merely asserted itself, an enceinte thunderhead before the downpour.
Spookiness aside, it was troubling that the essence of Colonel’s vision was more substantial than his body had been while it was alive; death had somehow given him an identity. Colonel wasn’t particularly unique, and for this reason he would not be missed. Hydra-like, another would rise in his place and join the multitude of unfortunate, faceless faces. Sid wrestled uncomfortably with this, the dissonance between his vision of the spirit and his memory. The corpse, exposed before the tourists, undid itself. It was the profound nonsense of that scene, and of the vision, of Colonel’s entire life, that made Sid wriggle in the sand like a charmed cobra.
Eventually, the ghost faded and vanished. The ocean, too, which had seemed minutes ago to roil, an army of monsters with a thousand legs in a hurry to do badness, metamorphosed into a single kind, old face, the foamy waves infinite white curls in its ancient beard. But Sid didn’t trust it; he lay exhausted and afraid of it like one who had just washed ashore from shipwreck. He turned and eyed suspiciously the two drain pipes at his back as they peeped eerily at him, a pair of giant binoculars he was trying to use through the wrong side. Fearing an unseen voyeur somewhere beyond the pair of man-sized sockets in the wall, or a turning of the fickle sea, he couldn’t sleep there on the beach as he might have done any other time. So, he trudged back to town. At dawn he approached his place on the pavement by the vacant lot, and slept among the familiar people.
Posted by Henry Grace at 10:50 AM