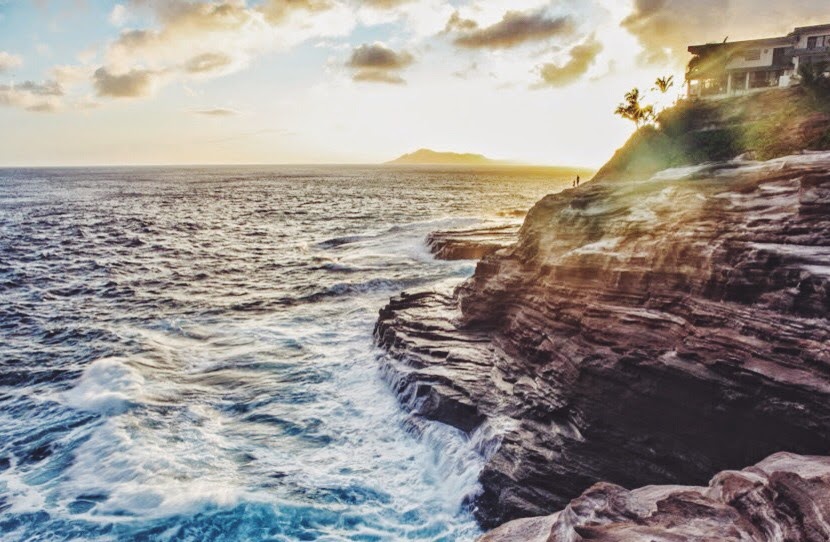 Just then a powerful wind brought clouds in from the distant horizon and pushed them all together, eclipsing the sun and creating a shadow that stretched far across the ocean. The broad darkness drew a distinct line between it and the light, so that it looked on the surface of the sea and the land to be a hard, anthracite thing, a living blight. The waves responded to the shadow and grew wild, furiously battering the cliffs, sacrificing themselves on their high walls by the hundreds. Spittle jetted high into the air, pummeling the earth with supernatural force as it fell. Sid watched from above as the sea churned white and a whirlpool opened, within which formed a swirling black cloud.
Sid had one final panoptic vision, as if the string of time and everyone that had ever occupied a skein on it had been rolled into one knotty bundle, existing together, elbows touching, faces on faces, backs supporting fellow backs. In the black ocean beneath him he saw the swarm of forgotten dead. By their appearances he knew them all: the hotel workers, the bar girls, the plantation coolies, ancient farmers tending the king’s taro, open-air market stall owners, tweakers, and so on. The faces swirled about in a wet inferno, the souls of those taken by the machinations of other men. And in this one mass of chaos he also saw himself everywhere at once. He saw himself lead to safety those that had wandered along a treacherous path, comfort those that had sorrowed until his arrival, instruct those that had wronged another, lift up those who fell. And those that he had lead, comforted, instructed, and lifted up went on to do the same for others who also did the same for others, ad infinitum.
The pit in the sea rumbled, widening, as all those inside who were driven by nothing to nowhere forever reached out to Sid in a frenzy of desperation, and although he saw each individually with an immaculate crystal eye, he somehow was able to train the focus of his perfect eye on the murky horizon, so as to see with the same clarity it and every lost person with one precise glance.
It was then that Sid awoke to the clouds drifting easily out to sea. The sun cast his shadow long to his left, and on the far cliffs in the distance beyond he noticed a group of fisherman had erected a series of deep green tents. The emerald outline of one honu’s head, and then another, could be seen peeking above the white waves before diving again out of view. Sid surveyed the cliffs and the sea, his eyes wandering until they came to the edge of everything that there is, the unreachable end of the world. He stumbled to his feet and stretched his legs, arms, and back.
He noticed a solitary cloud passing overhead which had turned gold in the setting sun. It was unusually round, and seemed to wink at him like a mischievous, swollen head. Where he thought the mouth should be, a gap opened and for an instant the wind whistled so that to Sid it sounded like the cloud spoke. “Hawaii Nei,” it said in a voice he thought he recognized, but he couldn’t quite place. The voice was high-pitched and gentle, yet hoarse from disuse. Sid then found himself clearing his throat, and coughing a tiny cough. The cloud tarried in the sky and as he watched, it flattened itself into mist. When it was gone, he thought of what his old friend Fatty Baldy had said.
Sid stood feebly at the height of the promontory as the temporarily defunct form in the sky was whisked away by the trade winds. The itching on his scalp returned, and he softly scratched the place it bothered him most. Although he still wasn’t sure what to do or where to go, the sun was almost behind the mountains in the distance and he knew he couldn’t stay on the cliffs forever, so he summoned the impetus to twist his lean body away from the sea, toward the land. He then started up the pine-covered path, descended the steep hill, and turned left. Once on the highway he headed west, though he thought he might go any direction—he was hungry and wanted first to get himself something to eat.
Posted by Henry Grace at 10:45 AM